We made it.
Done.
It’s over.
All comments I heard while helping grads sign-in to the arena hosting their ceremony. Happy that “the end” of learning/the year arrived.
But even when we said “goodbye” go superman (in many comic issues, most famously against doomsday, but also in battles with Mr Myxplyx and others) but he always returned…..
And even popular cartoonists endured beyond their original creations. Bloom County became Outland became Opus became Bloom County. Doonesbury has been cancelled and re-issued as often as Howard Stern (with similar statements from one editor as to why it was on the way out and another why they were celebrating the start of a new partnership).

I’ve seen Robins die (batman) only to return….actually that can be said about many characters. So, much like “the end of June” it’s not really an “end of learning” just a distraction to interrupt the traditional calendar schedule.  But even television has changed the way they have viewed “seasons” – perhaps it’s time for a closer look by educators to see some different approaches to a “school calendar” (sounds like a Summer of Learning topic!)

So, two of my favourite cartoonists (modern philosophers) and how they approached “an end” 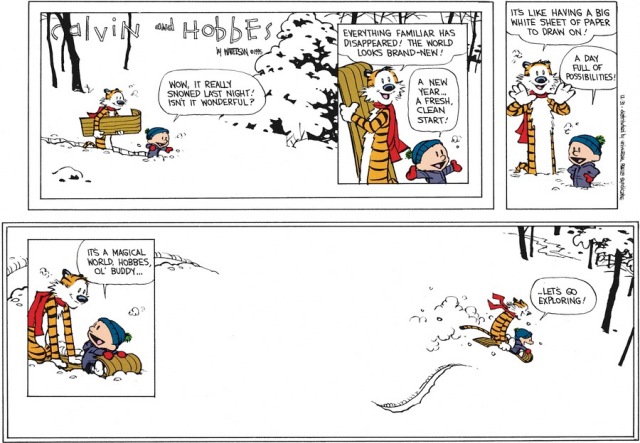 Principaling on the Pacific in Powell River BC Pushing 'technologization' in education: blending technology and curriculum seamlessly. Advocate for better understanding of Anxiety in Education (and use of self-regulation) Utilizing ePortfolios & Descriptive Feedback to personalize learning!
View all posts by technolandy →
This entry was posted in Uncategorized. Bookmark the permalink.